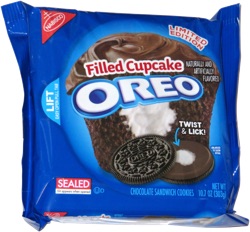 Taste test: This new flavor generated a lot of excitement, as the promise seemed to be that they would taste like a Hostess Cupcake. They used the usual chocolate Oreo cookies with standard markings, and the outwardly visible filling was a medium brown, dark but quite a bit lighter than the cookies. The center of the filling was promised to be white, with the admonition, "Twist & lick!" to access it.

Before getting to the sandwiches themselves, a short digression regarding the package: In my last limited-edition Oreo review, Cinnamon Bun, I traced the unfortunate progression of downsizing limited-edition Oreo containers to the tiny 10.7-oz. size, but then I praised Mondelez for finally taking a step back in the right direction, with a return to 12.2-oz. for Cinnamon Bun. Strike that, reverse it! As excited as I was to see this flavor, I was very disappointed to see the size revert to 10.7 oz.

Now to the cookies: They really did taste like chocolate frosted cupcakes. When I twisted and licked, it was clear that the white center of the filling was a different substance than the outer brown, with a creamy taste, but maybe there wasn't enough of it, as I couldn't really notice the creamy part when I ate the sandwiches whole. Still, a much different taste than standard Oreos, and pretty good.

Smell test: It really smells like cupcake frosting! Not the standard Oreos smell.