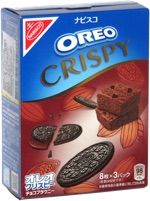 Taste test: This box from Japan contained three separate foil packets, each containing eight sandwiches constructed much like Oreo Thins, with thinner-than-normal Oreo cookies enclosing a creme filling, which was brownie-flavored in this case. The filling had a light brown color, a bit darker than the chocolate creme Oreos but still quite a bit lighter than the cookies surrounding it.

We crunched in to find a nice light crunch from the thin cookies, crumbs flying all over the place, and a chocolate taste that was good, but not much more like brownies than other chocolate Oreos. The Brownie Batter version were a better match for the taste of brownies, and the Mrs. Freshley's Oreo brownies came even closer — because they really were brownies. Still, good stuff.

Smell test: Mid chocolate smell, but not specifically like brownies.

From the package: “Imported from Japan”

This snack was discovered at Super 88, Boston. Review published March 2019.