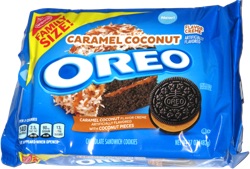 Taste test: We've reviewed several coconut-flavored Oreos — Fudge Cremes Coconut Delight, Coconut Thins and Thins Bites Fudge Dipped Coconut Creme — and one thing they all had in common was that none of them contained any actual coconut (another thing being that that all all really did taste like coconut). That isn't necessarily a bad thing, since I find the texture of coconut to be the worst aspect of it.

This flavor clearly aimed to change the artificial thing, as the flavor description declared "with coconut pieces," which showed up in the Ingredients as "Dried Coconut." The sandwiches had the usual chocolate Oreo cookies, with a very light brown color for the filling. There did appear to be some stuff in the filling, presumably the coconut bits.

I crunched in to find mostly a mix of creamy caramel and chocolate, with just little hints of coconut that were hard to even notice amid the other flavors. I could hardly notice the texture of the coconut bits, as I could feel a few bits of something remaining in my mouth, but they didn't really feel too much like coconut. A good, intense taste from the chocolate and caramel, but oddly, the first Oreo with real coconut hardly tasted like coconut.

This snack was discovered by Jeremy at Star Market at The Hub on Causeway. Review published January 2020.