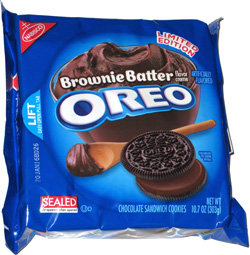 Taste test: This limited edition of Oreos was dark. Very dark. The picture on the wrapper showed a dark brown filling between the nearly-black Oreo cookies, but when I opened the package, the brownie batter filling looked actually just about equally as dark as the cookies. The lack of contrast between the cookies and the filling gave them kind of a strange, un-Oreo-like look.

I crunched in to find that there was as much chocolate as it looked like there would be, and yet they did this without going overboard with sweetness. It tasted kind of like brownie batter, but also kind of like chocolate frosting (either of which would be a good thing). The taste was creamy and very good. Even though they kept the sweetness in check, this was still a great one to have with a tall glass of cold milk. Very good!