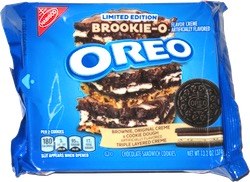 Taste test: This limited-edition version of Oreos promised three layers of stuff in between the standard chocolate cookies, with the front of the package showing a messy mix of cookie, creme, brownie and cookie dough as an illustration of the concept. It also showed a rendition of the actual Oreo sandwich, with three perfectly even layers — a brown "Brownie" creme layer and beige with black spots "Cookie Dough" creme layer surrounding a central "Original Creme" layer.

I opened the package to find that the sandwiches did indeed have three filling layers, but those layers looked much different from the picture — uneven and unbalanced within each sandwich, with the relative composition of the three strata varying greatly at any given point.

I poured myself some cold milk (because, of course) and crunched in to find that despite all of that stuff in there, the dominant taste was still largely like a regular Oreo. In bites that were primarily the brown creme, I did notice the extra chocolate, but it didn't say "Brownie" to me in taste, nor texture, which is a huge part of what makes brownies so special. I did notice stronger hints of cookie dough in bites dominated by that layer, but all in all, it tasted far less like a fantastic Oreo/brownie/cookie dough combination than you would hope for.

Smell test: Pretty similar to a regular Oreo. Maybe I can smell a bit of the cookie dough.