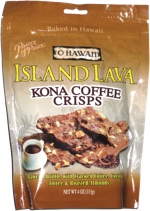 Taste test: This version of the Island Lava had a lighter brown color than the chocolate version that we reviewed first, with pieces of various shapes but still about the same thickness. There was a lot less stuff embedded in the actual surfaces than it showed in the picture on the bag. The bag said that the crisps contained coffee, toffee, coconut and almonds, but the only bits that seemed to be there were parts of almonds, and eve those were sparse.

I crunched in to find a nice crunch, crisp and somewhat brittle, with a taste that had maybe a hint of coffee, less than expected. The coconut also showed up at times through its distinctive texture, though I couldn't really taste any coconut. Even though the promised stuff didn't all seem to be there, the overall taste was pretty good.

From the package: “Our Hawaii, Kona coffee crisps are thin and crispy, dark bold coffee baker's brittle tainted in Coconut and dotted with English Toffee and roasted Almonds. Insatiably great! These crunchy munchies draw a crowd faster than 3'-5' waves rising on a soft trade wind dawn.” ... “Baked in Hawaii”