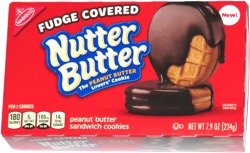 Taste test: When I heard that there were going to be fudge-coated Nutter Butters, it sounded great, but when I found a box of them, I was a bit disappointed to find that the sandwiches were round, rather than peanut-shaped. So really, they looked very much the same from the outside as the concurrently released Fudge Covered Oreos. The coating was less smooth and less shiny than it showed in the picture.

One innovation that came over from those coated Oreos was the three rows of MMMMMMM's on the clear inner wrapper. In this case, they followed the same practice, with the middle row — white in the case of Oreos — light brown to represent the peanut butter filling, while the outer ones were still brown.

As for the taste, I expected a lot here, given my high esteem for Nutter Butters, as well as my belief that coating stuff in fudge is almost always a good thing. I crunched in to find that the peanut butter taste was every bit as good as expected. The peanut butter easily overpowered the chocolate fudge taste, so it was tough at times to notice the fudge — it may have been a victim of just how good the peanut butter taste of Nutter Butters is. This was still a very good cookie, but it didn't meet my sky-high expectations and won't make the list of the greatest snacks ever.

This snack was discovered by Jeremy at Shaw's at Boston University. Review published February 2019.