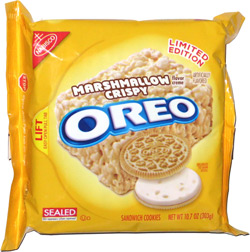 Taste test: There were a few very odd things about this limited-edition flavor of Oreos. First was their announcement/release schedule. In January 2014, the Oreo folks got a lot of buzz when they announced two special flavors, this one and Cookie Dough. We managed to get the Cookie Dough Oreos the next month, but these have been nowhere to be found during a year and half of searching (and we do look in many cookie aisles — often — for new versions of Oreos). That's very odd. (In fact, it was such a long gap of time that Oreo had shrunk the standard size of their limited-edition packaging from 12.2 oz. for Cookie Dough to 10.7 oz. for these, so the two flavors announced together didn't even match.)

On to the snack: The sandwiches were the standard Oreo size and shape, with Golden Oreo cookies bearing the standard markings and an off-white filling containing little bits of something about the same color as the cookies and presumably supposed to feel/taste like Rice Krispies.

I bit in to find a strong hint of that Rice Krispies Treat flavor on the first bite, an essence of marshmallow. After that, the taste was mostly like regular Golden Oreos. There was a minor crunch from the bits in the filling, but the texture didn't really bring Rice Krispies Treats to mind. Still, pretty good, a nice taste without being overly sweet.