Taste test: These cookies each consisted of a round thin graham cracker topped with a spongy marshmallow, and the whole thing was coated in a thin layer of dark chocolate. 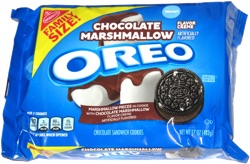 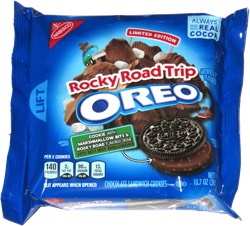 The overall Mallomars were each about 3/4-inch thick, and there were 18 cookies in the box, which seemed like a pretty generous number of cookies for this size box. They tasted pretty good, but I think marshmallow goes better with milk chocolate than with dark chocolate, so a change of chocolate might spur sales. But then again, they've been selling these since 1913, and I didn't taste them until 2007, so what the heck do I know?

From the package: “Pure Chocolate” ... “Mallomars were created by Nabisco in 1913 and first sold to a grocer in West Hoboken, NJ. The metropolitan New York City area boasts the most loyal Mallomars fans. More than 70% of all Mallomars sales are generated in the shadow of the Big Apple.” ... “Made in Canada”