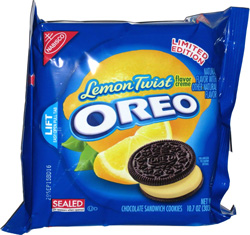 Taste test: This limited edition Oreo flavor came in the same tiny 10.7-oz. container that they've used for the last two limited editions that we found (Red Velvet and Cotton Candy). That was disappointing, because it was quite a bit smaller than the standard-size package that they used to have for special flavors. If they're so special, why can't Oreo give us the normal amount?

Anyway, the cookies looked mostly like regular Oreos, except the creme was light yellow instead of white. I crunched in to find that the sweet lemon creme was different enough than the standard white Oreo creme that the whole thing tasted different — and I didn't like it at all. Just a weird lemon taste and a weird/lemon/yuck aftertaste. It was like the lemon ruined the chocolate as well. Glad this one's limited, and come to think of it, maybe the small package was a good thing in this case!

I only ate the one cookie, so I shared the rest of the package with a large group of snackers who were drinking some beers after going for a run — a crowd that's usually big fans of all things Oreo. A few liked the lemon/chocolate taste, but most agreed that it was just a bad combination of flavors.

Smell test: Smelled like Oreos at first, but then I noticed the lemon.

This snack was discovered by Jeremy at Star Market (formerly Shaws, and Star Market again before that), Porter Square, Cambridge, Massachusetts. Review published May 2015.