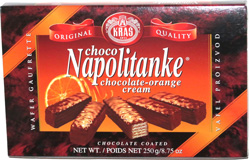 Taste test: This large box contained a vast array of wafer cookies, with four columns of seven cookies arranged in a single layer. Each piece was about 2 inches long, 5/8 inch wide and 5/8 inch high. Unlike many wafers that are semi-attached, these were not, as they were separated by a bit of air, which probably had something to do with the fact that they were coated in chocolate. The inside of each one consisted of five wafer layers surrounding four orange creme layers. Add in the chocolate coating on the outside, and that's a lot of layers!

The cookies looked pretty good arranged in the box, but unfortunately, they didn't taste as good as they looked. I don't generally like chocolate mixed with orange, though there have been some such snacks that surprised me by being pretty good. This one did not. There was a light crunch, good crispness and a decent amount of chocolate, but the mixture of orange and chocolate just wasn't good. Not one I'd buy again. I shared them with some folks who do like chocolate with orange, and results were mixed. Some liked the taste, some did not.