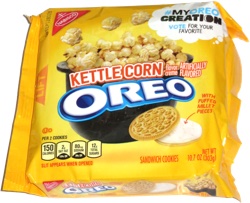 Taste test: These Oreos were released alongside two other surprising flavors, Cherry Cola and Piña Colada, for the first Oreo flavor contest that we're aware of. The sandwiches had the same beige cookies as Golden Oreos, with a filling that was off-white. I crunched in to find a nice sweet flavor, vaguely maple-like, but not anything like kettle corn. For a good kettle corn, I expect a light sweetness along with some saltiness. I liked the taste and level of sweetness here, but it was too sweet for kettle corn, and the saltiness was absent.

The package promised "puffed millet pieces" inside the creme, but they weren't immediately obvious visually. When I pulled open a sandwich to reveal the creme, I could see a few of those pieces, just slightly contrasted against the creme. Licking just the creme, I could feel a light crunch from those pieces, but when eating the whole sandwich the normal way, that light crunch was overshadowed by the much stronger cookie crunch and was not noticeable.

Smell test: Mostly like Golden Oreos, but sweetened with some maple, but really not anything like popcorn or kettle corn.

From the package: “With puffed millet pieces” ... “#MyOREOcreation 3 new flavors you pick the winner!”

This snack was discovered by Jeremy at Market Basket. Review published April 2018.