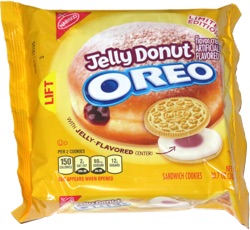 Taste test: These limited-edition Oreo sandwiches promised to taste like jelly donuts, and the creme filling was even designed to look like them. From the outside, each one looked like a Golden Oreo, but within the white-edged filling was a dark purplish center.

We peeled open a sandwich to find that the jelly-colored center actually took up a much larger portion of the filling than shown on the package (and it was also oval rather than round). It was tough to place the taste of the jelly precisely, but it seemed more like raspberry than any of the other possibilities. The taste was on the sweet side and reasonably reminded people of a jelly donut. Pretty good.

Smell test: Not really like a donut, but could definitely smell some jelly fruitiness in addition to the Golden Oreo aroma.

This snack was discovered by Jeremy at Wal-Mart. Review published June 2017.