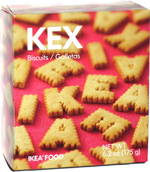 Put in alphabetical order, the letters included were A, E, I and K. Why did they choose those? In another order, they happen to spell IKEA, which is where we found them (not among the furniture, but in their excellent food area beyond the cash registers, which also features several kinds of mustard and many kinds of herring). As with any other letter-shaped snacks, we tried to play with them as much as we could, but we did also crunch in and eat them. They had a somewhat gritty texture and tasted kind of like graham crackers, with a mild sweetness. Most of our snackers liked them.

This snack was discovered by Jeremy at IKEA. Review published June 2013.