Taste test: These cookie sandwiches were very similar in construction to IKEA's Kex Choklad, in that they had two cookies, one with a heart-shaped hole revealing the filling, and the other without a hole but with a pattern of six hearts on the outside. 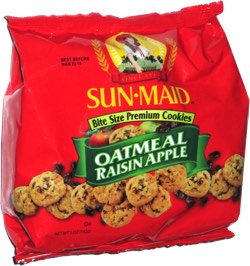 In this case, both cookies appeared to be the same vanilla flavor (versus the other kind's vanilla/chocolate combination), and the filling was some sort of apple jelly visible through the heart, with vanilla creme below that. The cookies were sweet and very tasty, and the apple filling was thick and chewy. So despite the lack of an original concept, these ended up tasting and feeling quite different from Kex Choklad.

From the package: “Biscuits with vanilla flavored filling and apple jelly glaze” ... “Produced in Germany”

This snack was discovered by Jeremy at IKEA. Review published .