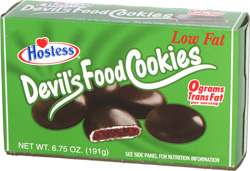 Taste test: These Snackwell's-style cookies came in a plastic tray to prevent them from scraping into each other, while leaving enough of a gap between cookies that there were only 12 of them.

The tray kept the cookies in decent (but far from perfect) condition. One ususual feature was that each cookie had two gaping holes on one side, as it appeared there was something stuck into each cookie to hold it while it got coated on all sides, and whatever that was generally didn't get removed very cleanly. Also, some of the cookies had some other dents in their smooth surfaces. As for the taste of the cookies, "Devil's Food" generally denotes chocolate with creme filling, and the picture on the box showed a thin creme layer between the soft(ish) cake center and the smooth(ish) chocolate coating. The actual creme layer was quite a bit thinner than it showed in the picture. Very thin. The taste was still pretty good, as was the texture, but I had these with a glass of cold milk, which served as something of a substitute for the largely missing creme. Not bad, but these really fell short of their potential with the various flaws mentioned, particularly the bare minimum level of creme filling.

This snack was discovered by Jeremy at Ocean State Job Lot. Review published May 2013.