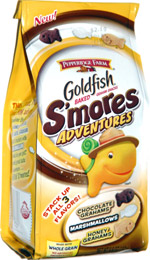 Taste test: This new version of Goldfish brought several innovations to the whole Goldfish concept, and some these concepts boggled the minds of our snackers.

The first thing was that there were three kinds of goldfish in the bag, but none of them were anything like gold, as they all lacked the customary cheddar cheese. The two primary kinds were chocolate and honey graham pieces, both in roughly the same size as customary goldfish, though with a different texture entirely. The third kind was much smaller, also shaped like fish, but white in color — these were the marshmallows. The idea was that if you eat all three kinds at once, you've got a s'more. This boggled people too, because most of the times that people grabbed a handful, it was missing one or two kinds, thus denying a real s'more opportunity. When it came to taste and texture, none of the three really lived up to what people would consider to be quality s'mores ingredients. The chocolate wasn't all that chocolatey and certainly not melty, the graham crackers were pretty average, and the marshmallows received particular ridicule because the taste and texture resembled the marshmallows in Lucky Charms (magically delicious!) though these were smaller. Yet somehow, despite the fact that none of the components were all that good, the combination was pretty decent in a remotely s'more-like way, and our snackers eventually are their way through the whole bag.

From the package: “Your imagination can take you anywhere even camping ... So, join Finn & his friends on a S'mores Adventure!” ... “Three great flavors, one fun adventure! Combine the taste of sweet honey graham Goldfish® crackers with marshmallow and what do you get? The next great taste adventures ... Goldfish® S'mores!”

This snack was discovered by Jeremy at Market Basket. Review published March 2010.