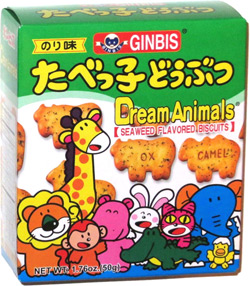 Taste test: These animal cookies had a wider variety of animal shapes than any others we've tried, with 46 kinds listed on the back back of the box, including some rather unusual species that we don't normally see made into cookies. We're glad that each one included an edible label in English identifying the animal, because otherwise would have been at loss to identify many of them. This was due to a combination of some of the shapes being not that distinctive and the animals fairly unusual. As a result, when we offered these to snackers to try, we included the instruction, "Read it before you eat it!"

We could fill up the Interweb if we listed all the animals, but here are a few: furseal, horn-owl, macaw, peafowl, porcupine, rat, sparrow, tapir and wildboar.

The surfaces had many bits of dark green seaweed attached, which made reading the labels somewhat challenging, but most were still readable. We crunched in to find lots of seaweed flavor and a tasty, light crunch. Seaweed eaters were big fans, and even some people who are on the fence about seaweed liked the taste. Of course, seaweed isn't for nearly everyone, but Ginbis does offer some versions (butter and coconut) with the same assortment of animals.

From the package: “What should we play? Let's play baseball.” ... “Product of China”