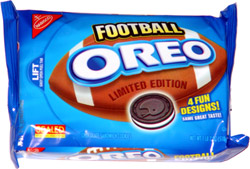 Taste test: For this version of Oreos, Nabisco rotated through four designs (a football, a quarterback throwing a football, a helmet and an X's and O's diagram) for one cookie in each sandwich and used the standard Oreo markings on the other one. They also doubled the creme filling — an extra bonus not mentioned on the package.

The taste was standard Oreo Double Stuf, a good chocolate crunch and creamy taste. The football artwork was OK, but it seemed overdone. They busied up the quarterback ones with six extra footballs floating around in the air, and even the football one had six small footballs apparently orbiting the big one. I'm guessing the thing in the middle of the X's and O's was supposed to be a player rushing, but it looked more like a dolphin. The helmet cookie was depicted on the package, but the helmets on the actual cookies sure looked a lot more scuffed up than that one.

These were the first Oreos I've bought that were packaged with a pull tab on the front. It allowed direct access to the cookies without having to rip open the end and pull out the tray, so it was pretty handy.

This snack was discovered by Jeremy at Wal-Mart. Review published January 2009.