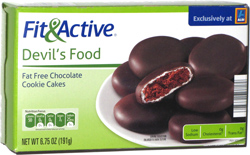 Taste test: These Snackwell's-style cakes/cookies were round and fairly large, with a nice appearance thanks to the smooth surfaces that looked better than a similar product from Hostess.

The box contained 12 pieces, separated on a tray that kept the surfaces largely blemish-free, though as with that Hostess ones, one side of each did have a couple of dings from whatever suspended it during the coating process. We poured a glass of cold milk and crunched in to find that there was plenty of chocolate inside and outside, but the creme layer in between hardly existed. The picture showed a fairly thin layer, but the actual layer was quite a bit less. If not for the glass of milk, that would have been a major problem, but even with the milk, some actual creme would have been a nice improvement. Decent, certainly not great.

This snack was discovered by Jeremy at Aldi Foods. Review published May 2014.