Taste test: When I bought this package along with several different flavors of Garden Cream Wafers, I had no idea what I was getting myself into. 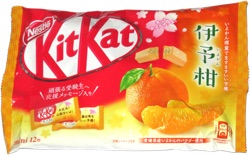 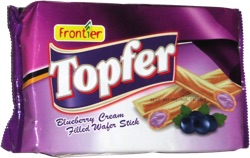 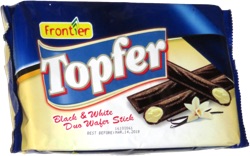 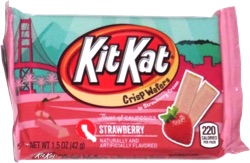 Usually I start each snack review by describing the appearance of the snack inside the wrapper. I'm not doing that here, because the stench that started emanating as soon as I peeled open the wrapper was all that I could think about. (If you want to get that information, it's pretty much the same as described under the chocolate version, but with different colors.) The smell immediately drew complaints from others in the room.

I reluctantly grabbed a wafer and took one small bite to find an intense fruity taste, certainly not good, but not the worst thing that I've ever eaten either. So, as is apparently true of durian in general, the taste was not nearly as bad as the smell. But ... yes, there's a but. That was only the initial taste. The aftertaste was a whole lot like that horrible stench. As were any follow-up burps. Bad. Yuck.

I initially opened a pack of Durian Wafers at a party at a friend's house, and the stench quickly enveloped the living room and kitchen. After the host discarded his partially eaten piece in the kitchen trash can, he later noticed the stench nearby, so he ended up sealing that piece inside a Ziploc. He also wrapped the rest of the package in many layers of Saran Wrap, which proved inadequate to contain the smell.

These wafers quickly became a legend as one of the worst snacks we've ever encountered.

On a related note, I must give the highest praise to the packaging methods and materials used for this product. That horrible stench was not the least bit noticeable until we opened the package.

Smell test: You don't want to smell this. You just don't.