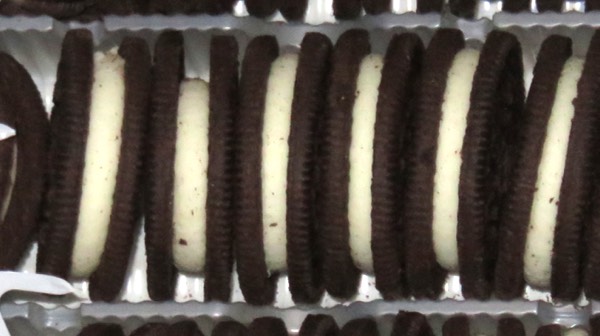 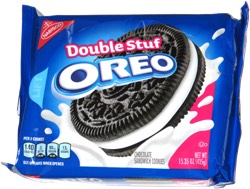 Taste test: This isn't a new product by any stretch, but it's one that we're way overdue in reviewing. We did our due diligence in reviewing the even-more-than-Double-Stuf Mega Stuf Oreo a few years back, as well as the Mint Creme version of the Double, but this one existed many years earlier. In fact, long before the days of countless varieties of Oreos, I believe the Double Stuf was the first-ever addition to the Oreo product line. Back when Oreos were persistently advertised with the Ice cold milk and an Oreo cookie jingle — which included the words "The one and only, creamy, crunchy, chocolate O-R-E-O" — they eventually had to add an extra (extremely self-contradictory) verse at the end, noting that "Oreo and Oreo with Double Stuf, it really is the one and only!"

As for these sandwich cookies, they did indeed have quite a lot of filling, noticeably more than original Oreos and noticeably less than Mega. The extra Stuf meant that they could fit fewer cookies in the box than the 36 in a standard package. The Nutrition Facts promised "about 15" servings of two cookies each, but there were actually 29 cookies, not 30. There's no good excuse that I can think of for the missing cookie, as they were in rows of 10, 9 and 10, so that middle row could have fit a 10th cookie just as easily as the other two did.

I crunched in to find that the ratio of cookie to filling was quite excellent. (I know some others have gone to great lengths to quantify/discredit the "Double Stuf" claim, so I didn't even try.) I like the original Oreos, but that extra creme really did the job — I liked these even more!

From the package: “Made in Mexico” ... “Produced with Genetic Engineering” ... “With looks like these, you can't help but do a double take” ... “Wonderfilled”