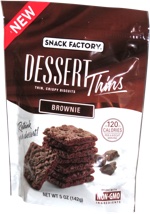 Taste test: Imitation has been a big trend in the snack industry, and Snack Factory's Pretzel Crisps have been a frequent target for imitators, with similar products from Rold Gold, Pressels and even Pepperidge Farm.

Now Snack Factory has become the imitator, with this product a clear knockoff of Brownie Brittle. The first Brownie Brittle imitator that we tried was from Trader Joe's, and it did not measure up.

This kind came in rectangular shapes, though many of the them were broken into smaller pieces. They had a dark brown color, with an ever darker color for the small chocolate chips embedded inside. The crunch didn't have quite the appeal of Brownie Brittle, as it was still crunchy but didn't have the same brittle feel or snap. The taste was good, satisfying my chocolate craving as I enjoyed a plateful of pieces with some cold milk. I'd put the overall experience as better than the Trader Joe's ones, but still a far cry from the original.

From the package: “Rethink your dessert!”