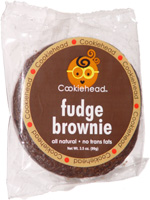 Taste test: This round, thick cookie was just under 4 inches in diameter and a little less than an inch thick.

The top of the cookie definitely looked like the correct brownie texture. Upon biting in, I liked the taste a lot. The feel was a little softer and less dense than I would generally expect a brownie to be, but otherwise the texture was very brownie-like. It would have nicer to be a little crisper on the top surface, but still, this generally did feel like a bronie. The package said that it contained two servings, but I had no trouble downing the entire thing (along with a glass of milk) in one sitting. Very good for a packaged brownie.

Company: Over The Top Food Company