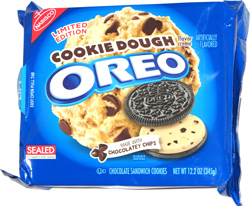 Taste test: This version of Oreos had the standard designs for the round cookies enclosing the sandwich, but in between there was a light brown filling, supplied a bit more generously than the standard white, though the filling thickness varied from sandwich to sandwich. The filling was darker in color than it showed in the illustration on the package, as it was more of a light brown than a beige. At first it looked like the filling was uniform in color, but when I pulled open a few sandwiches, I found that there were some darker areas of the filling (presumably representing the "chocolatey chips" promised on the package, but really they were not chips).

The idea of an Oreo that tasted liked cookie dough seemed pretty strange — since it's a cookie, isn't it by definition made from cookie dough? But we figured it was supposed to taste like cookie dough ice cream, or perhaps just like (uncooked) cookie dough. It didn't really. After eating some with "cookie dough" in my mind and thinking about it, maybe I tasted a hint of cookie dough, but this is one of those case where if you gave people these cookies unlabeled and asked what flavor they were, probably nobody would have guessed "cookie dough." Not bad, but also not among the best of the myriad varieties of Oreos we've eaten.

This snack was discovered by Jeremy at Wal-Mart. Review published February 2014.