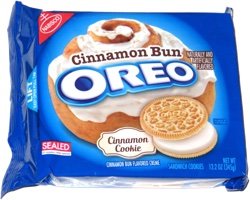 Taste test: This special version of Oreos had a white filling and beige color to the cookies, but the beige was not a consistent color, as there were darker spots here and there.

I bit in to find a fairly strong sweet cinnamon frosting flavor. It tasted kind of like a cinnamon roll, middling on the cinnamon from the cookie and high on the sugary scale from the filling. Not a perfect flavor match for a cinnamon roll, and maybe not a flavor that I would have guessed correctly without seeing the label, but still pretty good.

The hidden news here was the size of the package — 12.2 oz. In the past few years, as Taquitos.net has really gotten into tracking down and eating limited-edition Oreos, we've noticed an unfortunate trend. When we ate the Candy Corn in October 2013, the package was 15.25 oz. (This is bigger than the current original Oreos package, 14.3 oz., which itself has been dropping, though not as much as the limited editions.) When we reviewed Cookie Dough in February 2014, the size had dropped to 12.2 oz. That size remained for Watermelon in June, Pumpkin Spice in September, Caramel Apple in October and Peppermint in December. But when 2015 rolled around, 12.2 oz. wasn't even small enough, as Red Velvet appeared in February at just 10.7 oz.! That size then stayed consistent for Cotton Candy in May, S'mores in June, Brownie Batter in August, Key Lime Pie in August, Marshmallow Crispy in August and Gingerbread in November.

They're still smaller than the standard Oreos package, but the switch back to 12.2 oz. is a positive development. The shelf where this one was found also had a return visit for the Red Velvet ones, and those had grown from their previous size to the same 12.2-oz containers, evidence that it wasn't just a one-time thing because cinnamon buns.