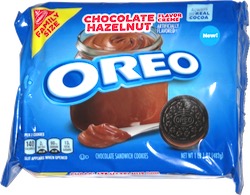 Taste test: Here we go again, it's a chocolate hazelnut version of Oreo — but not that Chocolate Hazelnut Oreo from 2018 — because this time they switched from Golden Oreo cookies to chocolate ones. What stayed the same was that they made a Nutella version of Oreo without licensing the Nutella name.

The creme layer was brown, but it was significantly lighter than the cookies. Thickness of filling varied, but most were pretty thick, and it looked rich and creamy.

I crunched in to find that the creme had the typical Oreo creme texture, and surprisingly the dominant taste was hazelnut, more so than the other version, and more so than licking Nutella off a spoon. This was particularly unexpected because of the chocolate cookies. All in all, I liked the taste of the Golden Oreo version better, a better rendition of the (unnamed) Nutella flavor. But also of note, unlike the other, this one was not labeled as a limited edition, so get used to it!

Smell test: More like Oreos than Nutella, but I could smell a hint of the hazelnut.

From the package: “Always made with real cocoa” ... “Contains a bioengineered food ingredient”