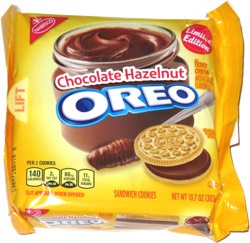 Taste test: These limited-edition Oreos put a Nutella-like filling in between two Golden Oreo cookies, but the Oreo folks conspicuously avoided using the word Nutella anywhere on the package. This is consistent with the past tendency of Oreo not to license well-known brands when incorporating their flavors into limited-edition Oreos — witness the "Not Rice Krispies Treats" Marshmallow Crispy Oreo, "Not Fruity Pebbles" Fruity-Crisp Oreo, "Not Red Hots" Hot & Spicy Cinnamon and "Not Cinnabon" Cinnamon Bun. (Three notable exceptions were Dunkin' Donuts, Swedish Fish and DQ Blizzard flavors.)

I crunched in to find that the filling had the consistency of the regular Oreo creme, with a flavor that was very much like Nutella, including all of the intensity of flavor that you would expect. It you like Nutella, you should like this!

Smell test: Very mild, but kind of like Nutella.