Taste test: It seems that the five flavors of Oreo Thins introduced by Nabisco during the past year might be just the beginning, as they've followed up by adding two "Thins" versions of Chips Ahoy to the cookie aisle — this one plus a Cinnamon Sugar version. 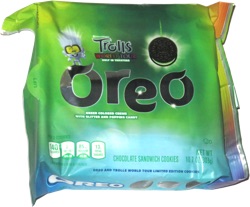 I opened the package to find three rows of about nine cookies each, including many not-quite-round shapes and several broken cookies. Unlike the Oreo Thins, which clearly looked, well, thin, these didn't jump out at me as being that much thinner than most chocolate chip cookies. If held up against and original Chips Ahoy cookie, the difference might be obvious, but mostly they looked like regular chocolate chip cookies.

The really good news was that they were really good chocolate chip cookies. They had a more brittle feel than the regular Chips Ahoy, with a light crunch, plus lots of great chocolate. With the package open and a glass of cold milk on hand, it was easy to eat lots of these cookies in rapid succession, so I did.