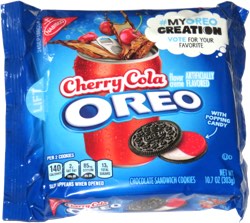 Taste test: Even with lots of new limited Oreo flavors hitting the market over the past year (including Kettle Corn), this one was far more ambitious than most — attempting not just the taste of cola, but cherry cola, and not just that flavor, but also incorporating the popping sensations that first came to the Oreo line with Firework Oreo. Like many other Oreo products, they didn't license the famous Cherry Coke name here, just going with a generic version.

The cookies were the standard chocolate ones, and the filling was split between red and white, with the popping stuff apparently within both. I crunched in to find that the mix of tastes really did remind me of cherry cola, though on the sweet side of things, with a whole lot of popping going on as well.

From the package: “With popping candy”

This snack was discovered by Jeremy at Market Basket. Review published April 2018.