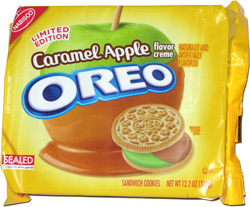 Taste test: This limited edition of Oreos took two Golden Oreo cookies for the exterior and then split the filling between a green apple half and a light brownish caramel. We offered these with lots of snackers, and most were eager to try them. Those who did were about equally split between fans who thought the combination tasted just like a caramel apple and detractors who though that the apple tasted fake, the caramel tasted fake, and the combination tasted bad. This was a sharp contrast to the universally praise that folks had for the Pumpkin Spice Oreos.

The major plus with these, particularly for those who liked them, was that there was zero chance of the biggest pitfall of real caramel apples — making a sticky caramel mess all over your hands and face.

This snack was discovered by Jeremy at Target. Review published October 2014.