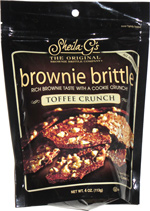 Taste test: After being quite thrilled by our first encounter with Brownie Brittle, the Chocolate Chip flavor, we were very excited to hear that there were more flavors, and we hoped they'd live up to the standard set by the first ones.

We opened the zipper-resealable bag to find that this flavor was remarkably similar to the other one. The look was a bit different, as the darker-than-brownie-batter chocolate chips were replaced by lighter-colored bits of toffee — though far fewer toffee bits than shown in the picture on the bag. The taste and texture were quite good, as the thin pieces had a light feel and brittle crunch; the taste was just like really good brownies. It would take a discerning palate to tell the difference between these and the chocolate chip kind, because the dominant flavor was still the brownies, with the butter toffee pieces a fairly minor player. Either way, our snackers were once again big fans, crunching on handful after handful. Perfect with cold milk!

From the package: “Rich brownie taste with a cookie crunch!” ... “No more fighting for that Corner Piece!” ... “All natural” ... “Like many brownie aficionados, Sheila is particularly fond of the crispy edges. In fact, on many an afternoon she would walk through the bakery gathering the brittle batter off the edges of the sheet pans as the brownies cooled in their racks. That started her wondering: How could she create a whole pan of crunchy edges? Well, lucky for us, she figured it out!”