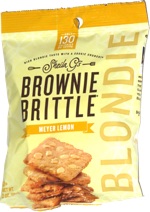 Taste test: This version of Brownie Brittle was quite different from the various other chocolate-heavy ones, going in a different flavor direction entirely. It had a light beige color generally, with some chunks embedded inside that had an even lighter shade of beige. The pieces were generally small and rectangular.

I crunched in to find a softer crunch and more cookie-like feel than the other kinds of Brownie Brittle — more crumbly and less brittle. The lemon taste was fairly mild, and it was sweet but not too sweet. Pretty good, but nothing special.

From the package: “Rich blondie taste with a cookie crunch!™” ... “Sheila is excited to delight fans with her latest creation, a Brownie Brittle Blondie. The idea originated from the delicious blondie bars that Sheila's mother made her every year for her birthday.”