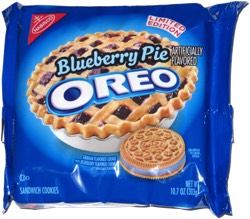 Taste test: This highly anticipated version of Oreos used the same graham cracker-flavored cookies as the S'mores and Key Lime Pie ones while adding a lavender-colored filling to bring on the blueberry.

I grabbed a sandwich and bit in to find that it really did taste like a blueberry pie. Pretty much exactly like one. I checked the ingredients, and there was no blueberry, but you could have fooled me. Great!

A note about the packaging: When we reviewed the Cinnamon Bun Oreo less than 6 months ago, we noted that after several years of shrinking the size of the limited-edition packages, Oreo had reversed course and gone back up one size. (See that review for a very detailed discussion of this issue.) Well, it didn't last — they've once again brought the size down to a paltry 10.7 oz. So you might want to buy multiple packages to avoid running out. I bought three!

Smell test: Mostly smells like graham crackers, but also a hint of blueberry on the second whiff.

This snack was discovered by Jeremy at Target. Review published June 2016.