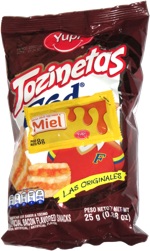 Taste test: These wheat-based snacks were cut into rectangular pieces, all curled up to various degrees, giving them sort of the look of pork rinds — except that each pieces had three reddish parallel stripes along the otherwise pale beige surfaces, giving them a bacon-like look.

We crunched in to find a strong, crisp crunch and a pretty good helping of smoky bacon flavor, though far less flavor than you would get from actual bacon.

The strange bonus here was that there was also a packet of honey attached to the front of the bag! After eating most of the bag's contents without it, I opened the packet and squeezed it out onto a plate. I don't think I've ever dipped bacon into honey before, but I dipped the bacon-like snacks into it, and it wasn't a bad combination. It would probably taste even better to dip actual bacon into honey.