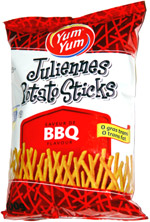 Taste test: This version of the Yum Yum potato sticks (or "Juliennes" in French) had a pretty good barbecue seasoning, and the taste was about an even mix of fried potato and barbecue.

Yum Yum really manages to put a lot of potato sticks into their bags, so one of these medium-sized bags is enough to feed quite a large group of people..

This snack was contributed to Taquitos.net by the manufacturer. Review published August 2008.