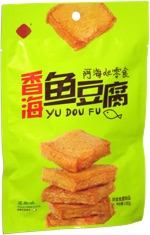 Taste test: This large bag was filled with similarly designed small packets containing thin rectangles of flavored fish tofu. The pieces were quite moist and had an orange-beige color. There was a small, flattened pepper pushed up against one side of the fish, which fell off when I took it out of the packet.

I bit in to find a soft fish cake texture, mildly pickled, not a bad fish taste. There was some pepper taste initially, but very minimal heat. So then I also ate the pepper, which seemed pretty mild too. More heat arrived soon after, not very hot, but noticeably hotter than before. It's tough to describe all of this, but it was far better than I expected, a pretty good weird snack.

This snack was discovered at Super 88, Boston. Review published .