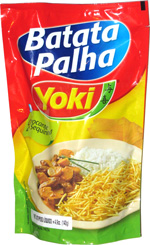 Taste test: When I spotted this bag along with some other kinds of potato sticks in the snack section of my local Brazilian grocer, I deliberately picked this over another one from the same company that was labeled as "extra thin" because I intended to snack on it, not serve it on a plate of food.

From the package: “Crocante e Sequinha”