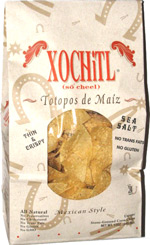 Taste test: In world where most tortilla chips are largely the same, these stood out from the crowd quite a bit: They were noticeably thinner and crispier than your typical tortilla chips.

These large chips had very smooth surfaces with some tiny bubbles embedded inside, with a very light crunch and high level of crispness. They also had lots of nice corn taste, with just enough salt. Though the chips were somewhat brittle, they were strong enough to handle some fairly chunky salsa. The only problem with these chips was the bag that they came in: It kept the chips fresh until initially opened, but the bag was super-awkward and messy to open, and then completely impossibly to reclose. Great chips!

From the package: “Thin & Crispy” ... “Mexican Style” ... “The Aztecs used to grind kernels of corn with big rocks in a form of a while and added water and lime to create a dough called Nixtamal, this dough was used to make tortillas. Today, hundreds of years later, Xochitl uses the same unique process to make the authentic corn totopos (chips) that you are about to taste. Xochitl totopos are oven-baked and quick fried to perfection creating delicious thin and crispy chips. After you open your totopos, our custom brown bag will help keep them fresh and crispy longer than any other bag on the market.”