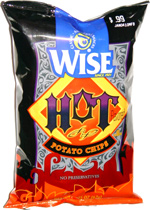 Taste test: These potato chips had a lot of orange seasoning on them, and when I crunched in, they tasted mostly like barbecue chips, rather than hot chips.

They were quite a bit less hot than Wise's Mighty Hot Potato Chips (which actually makes sense, given the names). There was some heat in the aftertaste, as it got up to a mid-level sort of heat when I ate the whole bag. Speaking of which, this was a mid-size bag, but it was filled up only about a third of the way, despite the fact that the chips were largely unbroken and hadn't settled down much. So there were far fewer chips than I expected, and I ate the whole bag with a sandwich. The label said 2.375 oz., but I highly doubt it was even close to that.

From the package: “Our Hot Flavored Potato Chips deliver a fiery kick you can't deny and spicy taste that will keep you reachin' for more. Get fired up with Wise!” 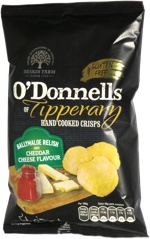