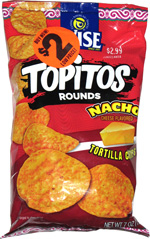 Taste test: These fairly large, round tortilla chips looked to be Wise's latest answer to Doritos. Not their first, of course — we saw triangular Bravos on the shelves for many years.

We opened the bag to find that although the chips were initially cut round before frying/baking, they didn't look as round in the real world as the picture on the front of the bag did. Most of the chips were curled or wiggly rather than flat, and many were broken into smaller pieces.

We crunched in to find a crisp feel with a somewhat soft, brittle crunch, as most pieces seemed notably less crunchy than Doritos. The taste was good, with lots of nacho cheese to savor, but the cheese was not so strong that we couldn't appreciate that there was plenty of corn flavor as well. Pretty good.

From the package: “surprise your taste buds with the zesty flavor and crunch of Wise® Nacho Cheese Topitos” ... “Made with whole grain corn, our tortilla chips are crispy and light, a perfect snack to satisfy your real cheese cravings.”

This snack was discovered by Jeremy at Key Foods, Brooklyn. Review published March 2014.