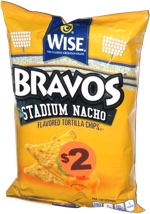 Taste test: These triangular tortilla chips had a light yellow color with some dark spots here and there, and there was a good helping of light powder on the surfaces. With the Stadium Nacho name, we figured the taste would be like nacho chips topped with nacho sauce on tap, like they have at the stadium. (There is precedent for this, as there was a limited Doritos Stadium Nacho flavor.) The marketing copy on the bag didn't really specify what they meant by Stadium Nacho.

We crunched in to find a nice light, crisp crunch and a flavor that was just as expected, as it really did tasted like the stadium nacho sauce, with a mild kick of jalapeño heat to go along with the cheese. I was surprised by how much I liked the taste, as my initial plate of chips was good enough that I did two refills before I headed over to my computer to write up this review. Very good!

Smell test: Some cheese sauce smell that overpowers the tortilla chips smell. But not really spicy.

From the package: “Cheesy Thrills” ... “We know you enjoy the thrill of being at the sports stadium: the roar of the crowd, the electricity in the air, and the incredible stadium views. With Bravos Stadium Nacho Tortilla Chips, the excitement is in the bag! We squeeze authentic stadium nacho taste onto every cheesy, spicy bag of Bravos.®”

This snack was discovered by Jeremy at 7-Eleven. Review published October 2018.