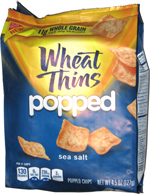 Taste test: After being kind of unimpressed by the bland taste of the Spicy Cheddar flavor of Wheat Thins Popped, I was a bit worried that without even attempting a bold flavor, the result could be even blander. We opened the bag to find the same variable-size square shapes and wiggly surfaces, with a puffy thickness kind of like Popchips, but thinner.

The initial taste was definitely sea salt, and after that it seemed a bit bland. But when I ate a few of these in a row, I did detect the nice Wheat Thins taste. Certainly far from the strongest flavor you'll find in a snack, but pretty good. Would also be good for dipping into something.

This snack was discovered by Jeremy at Market Basket. Review published November 2014.