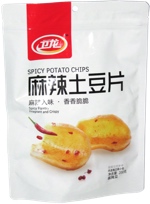 Taste test: When you've reviewed 2000 kinds of potato chips — this very review happens to be exactly the 2000th potato chip variety on Taquitos.net — it's rare to find one that completely stands out from the pack. This one unquestionably did!

Just feeling the bag, it didn't appear to contain potato chips at all. The large bag was thin and felt too dense to be potato chips, and the picture on the front appeared to depict thick-cut, moist slices of potato.

I opened the bag to find that it contained nine individual packets, each with much the same design as the main bag, very thin and not resembling potato chip bags at all. I couldn't tell for sure what was inside before opening them, but they sure felt dense and bendable, two signs that they did not contain potato chips.

When I opened my first packet, it didn't appear to contain potato chips in any conventional sense. Once the top was ripped open, it was easy to squeeze the contents out onto a plate without damaging them. Those contents didn't much resemble what was pictured. They seemed to be slices of raw potato soaked in a red/orange hot sauce. But if you define a potato chip as a thin slice of potato (leaving cooking out of it), then it could very well fit the definition.

I ate the "chips" with a fork, to keep my fingers dry, trying to scoop up just one slice at a time. There was no crunch whatsoever, but there was plenty of hot sauce and a raw potato feel, maybe made slightly less raw by just how thin they were cut. The hot sauce wasn't killer-hot, but it was pretty hot, and it lingered for a long while in the aftertaste.

So number 2000 was about as far from a normal potato chip experience as you could be, while still being a "potato chip."