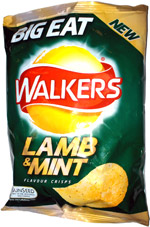 Taste test: These potato chips were the most unusual flavor we've found in a while.

We didn't know what to expect, so we dug in and ate some. The flavor did seem sort of meaty, and there was something maybe resembling mint in there, but it didn't taste minty in the conventional sense. It was a strange flavor, but not really a bad one in the opinion of any of our tasters. People didn't flock to eat extra handfuls of these, but we didn't get any complaints.

Smell test: Sort of minty, in an odd way.

From the package: “At Walkers we believe that crisps should taste fantastic. We want you to really enjoy every crisp, which is why we have made them better for you without changing the taste at all. They now contain 70% less saturated fat, because they are cooked in one of the healthiest oils there is, called Sunseed™, a special type of sunflower oil.” ... Ingredients include Lamb Powder.

Trivia: Colleen and Jeff found these chips on their honeymoon.

This snack was discovered by Colleen in London. Review published June 2007.