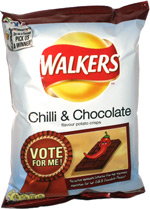 Taste test: These potato chips (part of the Do Us a Flavour promotion) had a slight orange glow to them, with nothing in the way of chili or chocolate seasoning that I could see.

The taste was definitely odd, but in the end I think I liked it. There was a hint of chocolate upon biting in, but it quickly went away and was overwhelmed by a moderately hot chili pepper taste that continued into the aftertaste. As I ate more chips, I wasn't sure whether I could taste the chocolate or not, because it kept going away, but it did return, ever so briefly, with each additional chip. I enjoyed eating these, but I don't think they did anything in terms of satisfying my chocolate craving. This tasty mix of flavors satisfied me in a non-chocolate sort of way.

Smell test: Wow, just a fascinating smell on first whiff, then on second whiff I realized that it really did smell like chili and chocolate.

From the package: “Spicy heat with a dark cocoa kick! Sounds crazy but is so tasty! And as Catherine rightly points out, what more do you want from a bag of crisps?”

This snack was discovered by Jeremy in London. Review published June 2009.