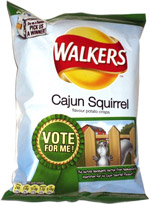 Taste test: These are just one of more than 1600 kinds of potato chips that we've reviewed!

Of all of the wacky crisp varieties in the Do Us A Flavour promotion from Walkers, this one got far and away the biggest buzz. Somehow, the idea of eating Cajun Squirrel really disturbed or intrigued people. The first things people wanted to know were, "Does it taste like squirrel?" and "Is it gross?"

Having eaten these chips, I can definitively say that I have no idea whether they tasted like squirrel, because I've never (at least knowingly) eaten squirrel. Probably few or none of the people asking me this have eaten squirrel either. But surprisingly, these chips did taste good. They were cut thin and were very, very crisp, sort of a orangeish yellow in color, with a few scattered green specks on some pieces and dark areas along some of the edges. The flavor combined a whole lot of different spices (see the ingredients below), and it didn't remind me of anything else I've ever eaten — so it's hard to describe, but it was tasty, spicy and mildly hot, with a slightly hot aftertaste. I had maybe a vague sense of some sort of meat flavor, but again, I have no idea what squirrel tastes like.

Our panel of tasters at a London hotel bar were as skeptical as anyone else when they saw the bag, but everyone who had the courage to crunch in actually liked the taste.

This snack was discovered by Jeremy in London. Review published .