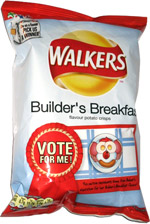 Taste test: These potato chips from the Do Us A Flavour promotion ambitiously tried to duplicate the taste a full English breakfast, meaning it could encompass all sorts of things, including various forms of bread, pudding, eggs, beans and potatoes — not to mention the various breakfast meats. I opened the bag to discover that the chips looked mostly like typical Walkers chips, but with a bit of an extra orange glow and a few tiny bits of black pepper visible on each chip.

I crunched in and found that the chips were a bit greasier than normal Walkers but really did taste like eggs and bacon, and indeed they tasted really good. It was a medium-strength taste, not weak but not super-strong. I don't think that they got the taste of the whole breakfast (Tayto's Ulster Fry chips tried to do the same thing) but they really got the fried eggs and bacon taste right on, and I liked these a lot.

Smell test: Wow, it really does smell like bacon and eggs.