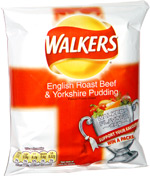 Some heard the Roast Beef & Yorkshire Pudding flavor and were unwilling to even try the chips; we won't ever know whether they would have liked them had they been willing to risk it. The remaining tasters heard the flavor and were eager to crunch in. Every one of this group ended up liking the taste, as it really did taste like roast beef.

Smell test: On first whiff, maybe like chicken, then after that, it smelled like beef stew. The people who weren't willing to taste said they were repulsed by the smell.