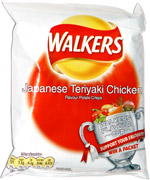 Taste test: These potato chips (part of the Walkers Flavour Cup series for World Cup Soccer) were on the smallish side and had a yellow-orange glow to them, with skin on many of the edges and some flavor seasoning on the surfaces.

The taste was just mildly like teriyaki, with a nice mix of other spices, including ginger, particularly in the aftertaste. After eating several chips, there was some nice mild heat to go along with the ginger in the aftertaste. Tasters disagreed over whether the taste was like chicken, or more just like the kinds of spices that are used with chicken (and the ingredients didn't list chicken at all) but people did like the taste.

Smell test: Mildly like chicken, but not with a lot of teriyaki.

This snack was discovered by Jeremy at ebay. Review published .